CFW+Plus The Convergence of Behavioral Sciences and Fire Prevention

More schools are having their students get involved with doing home safety visits with the local fire department, which is a great thing. Something I am noticing, however, is that we are getting better at getting in the door to do fire prevention, but once inside, at times fire fighters and students might need some ideas and direction on how to effectively talk with the occupants to get them to want smoke alarms, and to want the right number of smoke alarms and in the right locations. We are influenced every day in ways we don’t realize, so why not take some of these concepts and apply them to fire prevention?

For example, when I have been on home safety visits, and maybe you have observed this as well on the visits you have done, I have seen that people are often willing to have one smoke alarm installed, but not more than one, and the fire fighters aren’t always as effective in explaining why a home needs more than one…they often just say “you should have more than one” rather than explaining the reason behind it.

(An interesting, yet minor (and potentially effective) tweak on getting multiple smoke alarms installed was suggested in an interview I did with Rory Sutherland from Ogilvy Change in the UK, which I’ll cover below.)

I have been interested in the world of behavioral economics, as have many people, through reading the popular books (Predictably Irrational, The Upside of Irrationality), listening to podcasts and watching TED talks of people such as Daniel Ariely, a professor (and a burn survivor) who really brings the academic world of behavioral economics into the world of lay people in a fascinating and entertaining way.

Earlier this year, I was listening to a Freakonomics podcast  (and here’s the transcript) where they interviewed Jim Yong Kim, the president of the World Bank, former president of Dartmouth College, who was trained as an anthropologist. Dr. Kim talked about the attitude shift of using behavioral science to address the problem of global poverty, and commissioned a report by the World Bank on this subject, World Development Report 2015: Mind, Society and Behavior. They collected examples from around the globe of where behavioral science was applied to social problems in small ways, but with big results. Here is Dr. Kim talking on Freakonomics:

“Another one that I love is one that had an impact on, that affected people’s understanding socially of the importance of using less water. This was in Colombia in the late 90s. And they simply published in the newspaper how much water all the different people and companies and groups were using. And there was an overall decrease in water consumption that persisted. So, in other words, knowing that your neighbors are trying to save, or knowing that you’re not saving and they’re going to see it in the newspaper had a huge impact on people’s use of water.

Similarly there were in trying to reduce the number of accidents on the road, in Kenya, they put messages on buses that said if you see someone driving recklessly, look out the window, scream and yell at them and tell them to stop doing it. And everywhere you are scream and yell at people who are driving recklessly. It reduced insurance claims by 50 percent, you know, just to have the social pressure build in that particular way. So we are going to use this in World Bank Group.

We’re going to capture all of these great examples, and we’ve totally reorganized the bank to do just that. We now have what we call “Global Practices.” And their charge is to look all over the world and find out how specific countries have had success utilizing these insights that come from psychology. And so in doing that, we hope that they will then take these examples and then adapt them for the local context. “

The next Freakonomics episode, The Maddest Men of All, featured Rory Sutherland from Ogilvy Change, in the UK, talking about how small things can make big changes…a case study that he referenced was a call center in the UK where people would call in to renew or cancel their newspaper subscriptions. The newspaper had recently raised their rates and were trying to avoid losing subscribers, and they brought in Ogilvy Change to help them with how their call center people were talking to the subscribers.

What they did was make very small changes (nudges) in how the employees were talking to the customers, which resulted in huge (and positive) changes, as described in this section of the transcript from the podcast.

DUBNER:And how well has this collage of behavioralist technique performed for the call center?

HODGES: We found that calls using one or more of these techniques were three times more likely to be successful. And, in fact, 80% of them had a successful save of a customer or a successful sale.

DUBNER:What’s remarkable is how minor most of these changes are. Rory Sutherland again:

SUTHERLAND: If you want the world of business to understand the value of behavioral science, one of the first things that you’ve got to get across, which sounds trivial, but it is vitally important, is the understanding that small changes can have very large effects.

DUBNER:Consider another tweak that Ogilvy Change made at the newspaper call center. Typically, there are three types of subscription packages available — think of them as A, B, and C.

SUTHERLAND: And we simply asked the call center staff to change it to most people choose B, but if you like you can also have A or C. And we made a couple of tiny other changes as well. Those three tiny – and, to a classically trained economist, irrelevant – pieces of information tripled the conversion rate of the call center. So three times as many people calling actually upgraded to a sale to the previous finding when those sentences were omitted.

I contacted Rory on the chance that I might be able to talk with him further about applying these concepts to fire prevention, and we had a great conversation on Skype. He had a number of suggestions, and one of them was to have the fire fighters tell the homeowner that the smoke alarms come in packs of three, and that once they were opened, they had to install all of them…and coincidentally, the First Alert smoke alarms DO come in boxes of three! I thought it was a brilliant, yet small, change that could yield big results.

Rory is a very interesting person (watch his short video on reducing paper towel use in the bathroom). His company employs what they call “nudges” to influence behavior. For example, as an experiment, they put out a table with a selection of pastries and fruit. When they place a mirror behind the table, so people can see themselves as they are making their choices, more people take fruit than pastries because they are “self-reflecting” on their choices.

You can see his TED Talk on how the next revolution will be psychological, not technological.

Rory turned me on to a great book, The Small BIG, that really touches on this concept. It is a series of small nudges that, easy to implement, can result in outsized changes. For example, in the UK, they were trying to get more people to do their tax returns and the government was sending out letters. By including one sentence in a letter they increased tax revenue by 29%. They simply said how many people pay their taxes on time. Once sentence, 29% increase in tax collections.  I’ve been going through this book, and it has given me some ideas we might be able to employ, both in the home and as part of HSV programs (below). 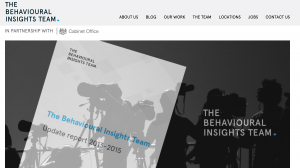 The UK government has embraced this concept so much that they have created the Behavioral Insights Team (also known as the Nudge Team) to use behavioral science in a multitude of other social issues. They published a report, Mindspace: Influencing Behavior through Public Policy, that served as the basis for the formation of the team and guides their efforts in policy

As a follow-up to the Mindspace report, the Behavioral Insights Team published a more streamlined approach to applying behavioral science to policy. EAST stands for Easy, Attractive, Social and Timely and you can download the report here.

Some “small BIG” changes that might work for fire prevention

So, what are some of the concepts that we might be able to apply from behavioral economics to fire safety? From what I have read so far, these are some ideas that popped into my mind (and these are just a very few…I KNOW that there are many, many more that can be done). In addition, we could do testing on these…try one method against a control group/community where we try another and then measure the effectiveness of one vs. the other, mix it up in different demographics, etc…

When AHJs are promoting smoke alarm programs…”We only have a limited number of smoke alarms, so be sure to call us today to schedule your home safety visit!”

“When I open up this box of three smoke alarms, I have to install of them, so you can help me out by letting me put them in the right places in your home.”

“We have installed XX number of smoke alarms in your neighbors homes, would you like to have them in yours as well?”

Stickers that people can put in their windows showing that they had a home safety visit and smoke alarms installed in their homes.

Putting in a portion on door hanger that the AHJ can say something such as “XX people on your street have smoke alarms, do you?”

This means giving people actions they need to take, on a web site, or on a door sticker. For example, making the door sticker with a tear-off portion that they can put into the mail to request a home safety visit. But, it must be returned by XX date to get one.

Where do we go from here?

This is an area that I think is really ripe for further study and practical application. I think that it is beyond marketing, and really involves what are non-traditional fields (as relating to fire safety) such as the behavioral sciences and public health, areas of study at many colleges and universities that could be tapped into.