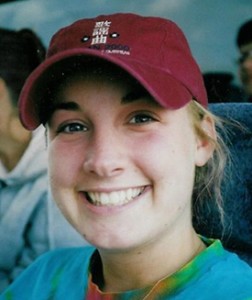 Liz graduated from high school in 2002. Cheerleading was her passion. She cheered for many different sports, but the highlight was being a part of our town’s very first competitive cheer squad. This team took the state title during their very first season of competition, and they went on to national competition in Myrtle Beach, South Carolina where they placed third in the nation.

When it came time to pick a college, there was no question. Liz had her heart set on the University of Minnesota. That was the only college visit we made and half way through the visit, Liz insisted that we leave … her mind was made up and she didn’t need to see anymore. She was ecstatic when she was accepted into the College of Liberal Arts.

She spent her first year living in Bailey Hall on the St. Paul Campus. I had never seen my daughter so happy. She was living in an exciting metropolitan area, she was making many diverse friends, and she was getting good grades … all goals she had set for herself.

Her college majors were Psychology and Sociology and her career goal was to attend graduate school in California and become a criminal psychologist and work with dangerous criminals.

She and six of her closest friends found a large duplex to rent for their sophomore year, just a few blocks from the U. She worked so hard during that summer of 2003 to earn as much money as she could for school.

September 1, 2003 was moving day and she was so excited to be reunited with her friends again and to be starting on this new adventure of living on her own.

The house was very old, but it was clean … moving day was very hot and very hectic … but still as her parents we made sure there were smoke detectors and that they were all working properly. We never gave any thought to anything else regarding fire safety that day.

Liz was sharing a bedroom on the second floor and her bed was up against a wall with a large double window right above it. Even with that window so close, it didn’t make any difference.

On Friday, September 19 th, after a busy day of classes, going to the Minnesota Wild Hockey game, and driving to a nearby town to party at the home of another roommate, Liz and three roommates returned home during the early morning hours of Saturday, September 20 th.

Despite the late hour, they sat out on the porch, smoking, drinking and talking. To the best of our knowledge Liz was one of the last to go to bed, sometime between 4 and 4:30 am.

The fire call came in at 4:50 am … careless smoking on that porch had set that old wooden house ablaze … there was only one way out and it was through the porch. There were no sprinklers and reportedly not all of the smoke detectors were working. Liz and two of her roommates died of smoke inhalation that day.

There are many lessons to be learned from this fire. As parents, as colleges, as landlords, and as communities, we all play a part in making college housing a safe place to live. Having more than one exit, sprinkler systems, and smoke alarms that cannot be dismantled, are just some of the ways we can do this.

The most important part of this equation, however, are the students themselves. They must take their own personal safety seriously. They are NOT invincible … Liz’s death and the deaths of the 60 some other college students who have died in a similar manner proves this over and over again.