In November, the United States Fire Administration released a report that took an in-depth look at college-related fire fatalities from 2000 to 2015. Drawing on data compiled by Campus Firewatch, along with other sources, USFA followed up on each incident to gather more detailed information that emerged as a result of the fire investigation. This was a process that took quite a bit of time and effort, according to USFA, and has resulted in a report that has invaluable data that validates much of what we have anecdotally observed. (NOTE: Campus Firewatch contributed information and input to this report and reviewed it prior to publication.) 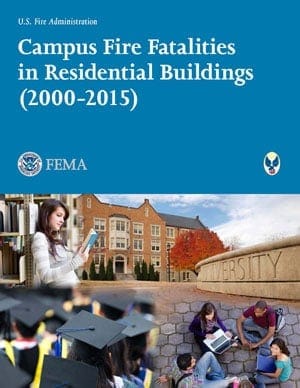 As part of gathering information from the fire departments, it was agreed that no specific incidents would be identified, that the information would only be reported in the aggregate. The complete report is available for download from USFA.

Campus Firewatch began compiling information on college-related fires in 2000 by monitoring news media stories. When a fatal college-related incident occurred, I would contact the fire department and the school to get more details and confirmation that the incident is college-related. While this is certainly an imperfect system, it is the only option available since the National Fire Incident Reporting System (NFIRS) does not have the ability to capture data on college-related, off-campus fires. The only information that I would capture is the details on the incident such as date, time, location, type of building, fire fighting operations and information about the victims. Since the process for fire investigations can take weeks or months to complete, I was not able to follow up on these incidents and get the level of information that USFA gathered for this report.

You can view all of Campus Firewatch’s data on college-related fires online in a variety of formats, including spreadsheet, map and compilation at www.campus-firewatch.com under the RESOURCE tab. There, you will find the data in different formats, including

USFA established criteria for identifying fatalities for its report that include:

Those not included are:

The information that I have been gathering through Campus Firewatch is not as restrictive. I have always looked at whether the deaths occurred because of the presence of the students or if the outcome might have been different if the student had had knowledge about how to prevent the fire or escape.

For example, I do not impose a geographic boundary around the campus. Students are living further and further from campuses in order to find inexpensive lodging. For example, I live near the University of Massachusetts-Amherst, and there are students living in a large apartment complex in Sunderland that is serviced by the bus system for UMass and is six miles from campus.

In 2005, three students were killed in a fire in Chicago, Illinois. They attended school in Arizona but were taking part in a semester-long, school-mandated internship when they died. I included this in my compilation because they were involved in an activity directed by the school.

I also include non-students who are present because of the student. In 2000, a student and her parents were killed in an off-campus fire in Berkley, California. The parents were helping their daughter move into her off-campus house and were staying overnight in the house when the fire broke out, killing all three. They were trapped when the windows wouldn’t open because they had been painted shut, and they were in the house at the time of the fire clearly because of their daughter, a student.

Campus Firewatch has identified 170 college-related fatalities, while USFA has identified 118. However, despite the difference in criteria, and numbers, between Campus Firewatch and USFA, similar patterns have emerged from the data. In addition, because of the in-depth analysis that USFA was able to devote in gathering post-fire information, this report has a wealth of invaluable information that can help in developing more effective, evidence-based prevention programs that focus on where the problem areas lie that need to be addressed. 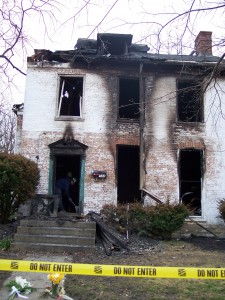 The problem is in the off-campus environment. USFA has determined that 94% of the fire deaths were in off-campus housing (Campus Firewatch 87%). This is where a majority of the students live and they are also living in buildings that are not as well maintained as college residence halls and do not have the same level of safety systems (fire alarm or sprinkler systems), control over ignition sources (smoking, cooking, electrical) and behavior, primarily that related to alcohol.

All of the college-related incidents since 2005 have occurred in off-campus or Greek housing (predominantly off-campus). This is a testimonial to the efforts that schools are making to protect their students through improved infrastructure, policies and education.

One of the most telling statistics to emerge from this report is that regarding the prevalence of alcohol in these fires. Anecdotally, this is something that has always been suspected, but USFA was able to determine that alcohol was a factor in 76% of the fatalities. At least one of the students involved was legally drunk, which is a blood alcohol level of 0.08% or above.

Being impaired by alcohol can play a role in two ways. The first is that the impairment may lead to the fire occurring, such as careless disposal of smoking materials. The second is that the victim may not be able to react appropriately, or at all, when the fire does break out.

As with the general population, smoking is the leading cause of 29% of the fatal college-related fires. It has been suspected, through anecdotal observations, that couches were a significant contributing factor, and USFA determined that in 52% of the smoking-related fires, couches were involved, and that a third of the time these couches were on porches or decks. This is such a problem in a number of communities that they have, through ordinance, banned upholstered furniture from porches and decks (see the 2012 article from Campus Firewatch on Couch, Porch and Deck Fires.).

A similar problem is discarding smoking materials into an improper container such as plastic pails, on the decks or outside of the building.

Almost half of the victims are 20 and 21 years old, which is no surprise. A number of schools required that freshman live on-campus, so it is generally the older students that are moving into off-campus housing. Two-thirds of the victims were male.

As with the general population, automatic fire sprinklers were not present in any of the fatal fires. Smoke alarms were missing or disabled in 58% of the fires, which actually surprises me because I would have thought that the number would have been higher based on my anecdotal observations. According to the USFA report, 20% of the fires did not have any smoke alarms present and they had been tampered with in 38% of the incidents.

A significant number of incidents, 71%, occur on Friday, Saturday or Sunday with 73% of them occurring between midnight and 6:00 a.m. Twenty-five percent of the fatal fires occur in April and May, with 23% in September and October and another 235 occur in January and February. As one would expect, the summer months of June, July and August have very low numbers of fatal fires.

USFA has done a remarkable job of gathering detailed information on college-related fires that has been lacking. This information validates much of what, anecdotally, fire safety professionals already suspected, such as the impact of alcohol, the cause of the fires and the contribution of factors such as couches. This report will stand as a landmark in helping campus and community fire officials develop educational programs and policies that will focus on where the problems lie and methods to address these very specific problems.

Since the problem lies in the off-campus environment, it is necessary to work with landlords to help address the problems that may exist with the quality of the housing and the conditions in them. This is a significant problem in Boston, for example, that the city has been struggling with for years and where a series of tragic fires have occurred, all in off-campus housing and all involving Boston University students. (This was featured in a three-part series The Shadow Campus by the Boston Globe in 2014).

However, it is also important that parents play a role as well in helping their children choose fire safe housing. For the past two years I have been in Boston during move-in weekend when leases turn over on September 1. So often, the parents I talk with are seeing the apartments for the first time and are appalled at the conditions they are in. However, by then, it is too late, the lease has been signed.

Fortunately, there has been a significant downward trend on fatal college-related fires, from a high of 20 in 2006/2007 to a low of four in each of the last two academic years, and none in the Fall 2015 semester. I would attribute this to the increased awareness among students, parents and the community to the dangers in off-campus housing, hopefully a trend that will continue.