Fire safety doesn’t have to wait for National Campus Fire Safety Month in September, it is something that is important all year long. For that reason, Campus Firewatch is going to be having a Theme each month to help schools and communities in continuing to engage with students in fire safety.

Have something you want to share? Send it in to me to consider!

NFPA has a page devoted to cooking information, stats, etc.

USFA has a page devoted to cooking information, stats, etc. with customizable posters and door hangers.

Some videos about fire safety for people with disabilities with cooking messages in them from the Michael H. Minger Foundation.

NFPA has a page devoted to heating safety

USFA has a page devoted to heating safety

January-Electrical and Off-Campus, What to Look for in Housing

There are two themes this month. Electrical fire safety has definitely come to the forefront with all of the incidents involving hoverboards catching fire, which has resulted in many schools banning them from their campuses. This is also the time when students are starting to look for off-campus housing for the upcoming fall semester, so it is an opportunity to let them know what they should be looking for in fire-safe housing.  Remember, 85% of fatal fires have happened in off-campus housing where a vast majority of the students live.

More to come in this section soon!

Candles are a significant cause of all house fires, year-round. While many colleges and universities ban candles in residence halls (for good reasons!), students are eventually going to be living on their own. This is a good time to teach them the importance of how to use candles safely-remember, if you don’t do it know, when will they learn, who else is going to teach them?  Remember, 85% of fatal fires have happened in off-campus housing where a vast majority of the students live.

According to the NFPA, in all housing:

NFPA has a page devoted to candle safety 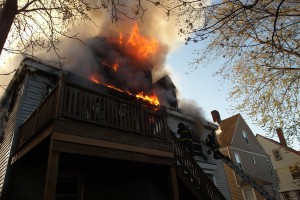 Boston University Senior Binland Lee died in this off-campus fire that was started by smoking materials.

Smoking is the leading cause of fatal fires in college and university housing, according to the United States Fire Administration. In fact, smoking is the leading cause of ALL fatal fires across the United States (and has been for years), so if we can help fix the off-campus housing fire safety problem, we can potentially make a huge dent in the national fire safety problem for the future!

Couches were a factor in 52% of fatal college/university fires.

Adding to this, a leading contributing factor is that over half of these fires, a couch was involved and a third of the time the couches were located outside on a deck or a porch (where there are no smoke alarms at all). Because of this problem, a number of communities have banned upholstered furniture from outside decks and porches (also because of the health issues involved with providing a home for insects and rodents).

Along with smoking and couches is the fact that alcohol was a factor in three out of four fatal fires, so a common scenario could be that, with the warmer weather, students are having a party on a porch with a couch on it, a cigarette rolls down into the couch and smolders until the middle of the night, when the couch is ignited. Because there are no smoke alarms, the fire builds rapidly, undetected, and then spreads into the house.

Yes, this is a scenario that has happened a number of times, with fatal consequences, but it doesn’t have to happen, with just a little education.

According to the NFPA, in all occupancies:

The Alarming Truth is a fictional, but based in reality, video about the impact of a fatal, off-campus fire. It is available for free for streaming and download.

The Alarming Truth where you can stream and download the video

9 Fires is a video that tells the impact of 9 college-related fires that happened within weeks of one another at schools across the country. The chapter about off-campus fires is a very compelling one about three fires, one that had a fatal, tragic outcome. The full video, as well as the three chapters (on-campus, off-campus and laboratory) are available from the Michael H. Minger Foundation for streaming and free download.

NFPA has a page devoted to off-campus fire safety

USFA has a page devoted to college fire safety

There are downloadable posters available on smoke alarms and general fire safety (which is important all year long!) from the Minger Foundation

Have a resource you want to submit to be included? Use the form below!